10 Steps to nodejs nirvana in production

We have been using node.js in production environments since a few years now, back when it was still in 0.4. Node.js has sure come a long way since. 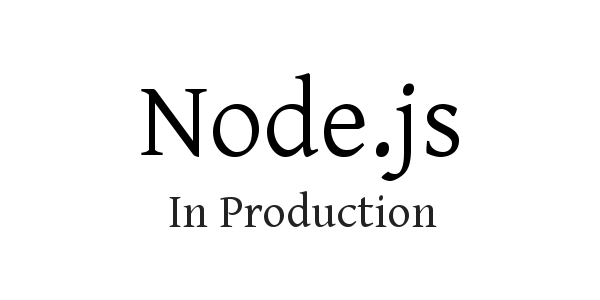 We have used node for e-commerce, for ad-serving, as an API server and just about everything else, short of calculating the nth fibonacci number (we use GO for that sort of stuff, no kidding). When you run stuff in production, and at scale, there are lessons to be learned and insights to be gleaned, sometimes the hard way. This is a compilation of certain learnings that work for us, listed here in the hope that someone may find it useful. YMMV.

For the impatient, here is the tl;dr

As with any high availability system, you need to make sure that your node process is up all the time, and it starts at boot time.

There are multiple options for this, from monit to custom sys V init scripts and what not, but we have stayed with upstart.

Upstart is not available everywhere, but our production environments has always been Ubuntu, where it is available by default. Here's how the upstart config looks like.

The -u switch is to set the uid of the node process, and -l and -e redirect stdout/stderr to files. The redirection can also be done on command line, but that won't play well with log-rotation.

Place the upstart config file in /etc/init, and then use start to start the process.

To restart or stop

If you ever change the myserver.conf, use stop and start instead of restart myserver, as restart would not re-read the upstart config file.

Use cluster for multi-core environments

A node process uses a single core, and there isn't anything like threads (thank god for that). To make use of all the cores, you have to use multiple processes, and the cluster module helps here.

The manual page for cluster still says its experimental, but don't let that deter you. It has come a far way off from the earliest incarnations, and its a must for any production server.

What cluster does is to start multiple node processes and load balance among them. It does this almost magically, without you needing to change any code.

As you can see in the command line we used in the init script, all we do is to wrap the app.js process with a script, and that brings in cluster. Its like forking a process in C after creating the listening socket.

This is how some basic cluster code looks like

Use (re)cluster for zero downtime deployments

Even in environments where only one core is available, as in our EC2 setup where we auto scale with small instances (1 Compute unit), there are advantages to using cluster. For one, you can use it to support zero downtime deployments or restarts.

If you reload nginx after changing the configuration, the master process forks new workers and tells the old ones to stop accepting new connections, but let them server existing sockets before exiting. So no downtime is involved when nginx is reloaded. We do the same thing with our node apps, and to do this, we use an npm module called recluster. The bin/cluster wrapper makes this automatic, and when a USR2 signal is sent to the master, it executes a reload. In our deployment script, after deploying the code, we issue a reload by sending a signal. There is a module named recluster that is a wrapper over node's cluster module and does this. Our bin/cluster shell wrapper actually uses recluster to do this.

If you use nfs, you could use the filesystem instead of sending a signal to the process to do this. We use a file named restart that is touched when we want the cluster to be restarted. Inside the bin/cluster wrapper, we use fs.watchFile to watch the restart file, reloading the cluster. This is slightly more convenient than figuring out the master process id and doing kill -USR2 <pid>, and especially handy if you use nfs and want to restart multiple servers at once.

We have our own wrapper script for this, so if we run in development, we run as

then this simply changes to

The wrapper adds all the cluster functionality, without requiring us to change anything in the app.js.

In spite of our best intentions, things go wrong in production. One recent issue we had caused node.js to use too much of CPU. On EC2, if you do that, you meet the same fate as Oliver Twist (The Boy who asked for more). Any spikes above a few seconds and you are penalized for being a noisy tenant via steal time, and the server becomes unresponsive.

In our auto scaling setup we have on EC2, we have a ELB -> nginx -> node.js stack, and when things start getting bad on any of the instances, ELB will detect iand launch new instances. While we have made setting up a new instance really fast, it still takes 2-3 minutes for the instance to come up, deploy code, compile stuff and then be detected as up by the ELB. That's too slow for our setup, and for this reason, we built redundancy into every instance. Our cluster shell wrapper also checks for a heartbeat, and if a timeout happens, restarts the app. Here's how that code looks like

Thou shall rotate your logs is a commandment most people follow. How do we do it? Simple, we use logrotate, which is already there on most linux systems.

Copy this file in /etc/logrotate.d/

When the logrotate cron runs, it reads the above configuration, renames the files specified here (myserver.out becomes myserver.out.1) and then signals our myserver process using the reload command.

When you run reload myserver, upstart will send a signal to the application. At that moment, the app should close its existing stderr, stdout and reopen them.

args.l and args.e are the files to be used for stdout/stderr, specified by running the process with -l and -e options.

Capistrano what? Who wants to run ruby to install node programs and add another dependency.

For deployments, we use a modified version of the visionmedia deploy.sh script. Its a shell script, so no prerequisites, and is quite flexible, so we use it in other non nodejs projects as well.

We use express as our web framework, and its a de-facto standard now. Express boilerplate code could do with some improvements, here is what we change at the bottom of a generated app.js

Unless you are still in the dark ages, running a very traditional LAMP stack, chances are you will use some nosql. My advice, don't bother with anything else, just stick to redis. In our case, we use redis for session storage, and as a caching layer for mysql and other data.

If you use redis in production, use it with hiredis driver. Without hiredis, we have seen redis choke the server even at moderate loads. Hiredis is an async implementation of the redis protocol.

Using hiredis instead of the default javascript implementation is fairly simple, just add it as a dependency.

Profile often, with the v8 profiler.

The v8 profiler is easy to enable, you just add the --prof switch to node.

It will save you a lot of time if you get stuck with memory or CPU issues, and even otherwise, its a good idea to know where the bottlenecks are.

This creates a v8.log file, which you can then process with tools like node-tick.

Its also possible to programatically enable it, such that you enable it by sending a signal and then turn it off after collecting profiler data, but I haven't experimented with that and YMMV. The profiler runs anyway in v8, to identify code that is hot and optimize, so the overhead of --prof isn't much. We have run it in production and it has helped us figure CPU issues.

You can run a REPL inside your node app, and then connect to it via a socket.

then require repl.js somewhere inside your app, say in app.js.

Now you can connect to your app in production, view variables, change settings.

Remember, GOD mode is absolute power, and that comes with greatest responsibilities. You can mess things up.

If you use cluster, you should tweak the code example above to use a different port for each worker, or else you will have to telnet many a times and then hope to get the right process.

For the paranoid, you can run REPL on a unix socket as well, and use it with socat.

Original article published on THRUPUT: Node.js on Production
Included here as an reference.